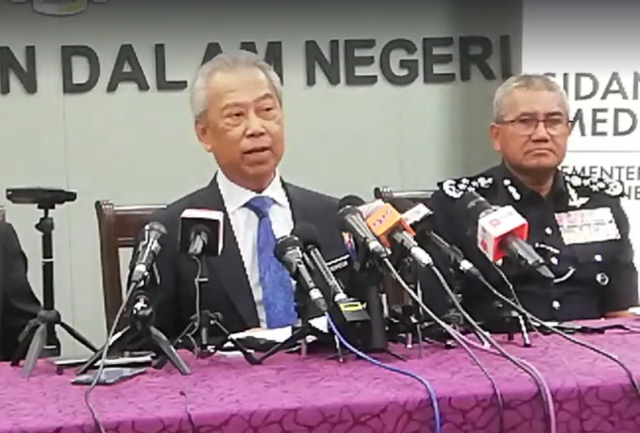 PUTRAJAYA — A police investigation reveals that lawyers of a developer company hired a group of Malay men to “take control” of the situation at a Hindu temple in Selangor last Monday but they intruded into the house of worship, Home Minister Tan Sri Muhyiddin Yassin disclosed today.

He said two lawyers of the company, One City Development Sdn Bhd, were among the 21 people the police have arrested to assist in the investigation into the riots near the Sri Maha Mariamman Temple in USJ 25, Putra Heights, near Subang Jaya early Monday and yesterday.

The incidents were not racial at all but stemmed from a dispute between One City Development and the temple administration committee over ownership of the land on which the temple stands, he said at a press conference at the ministry.

Muhyiddin said those linked to the company had not complied with the process of acquisition of the temple site as planned in accordance with the legal provisions.

He said the head of the group of men had been given RM150,000 to “exercise control” over the temple and that the 50 people hired for the task had been paid between RM150 and RM300 each.

Muhyiddin said the most irresponsible and illegal act of encroaching into the temple had angered the Hindu devotees who were in the house of worship and sparked the quarrel and ensuing fight as well as the damage to property.

One City Development is the owner of the land on which stands the temple.

Muhyiddin said the Shah Alam High Court had on March 11, 2014, recorded a consent judgment on the relocation of the temple and the return of the present temple site vacant to the owner.

Nevertheless, he said, the consent judgment could not be executed because of an objection to the judgment by some Hindu devotees.

Based on the police investigation, two groups of Hindu devotees were involved – one in agreement to the relocation and the other against, he said.

Muhyiddin said that after a series of negotiations between the parties failed to reach a consensus, the developer planned to take over the temple site as per the court order but failed because of the protests from the Hindu groups and commotion at the site.

The developer tried again to take over the temple site, scheduled for 7 am on Nov 26, after having discussions on the matter with the temple committee, he said.

Muhyiddin said the police were informed of the plan and they were prepared to maintain order in the vicinity of the temple.

However, the police investigation found that the developer’s lawyers had hired a group of men who intruded into the temple and exercised control over the house of worship before the arrival of the developer and the police that morning, he said.

Asked whether the developer had paid to hire the men, Muhyiddin said that could not be ruled out.

Muhyiddin said he was disappointed with the rash and negligent action of those linked to the developer, adding that they had clearly violated the law.

“If this rash and negligent action had not been resorted to, I believe there would not have been the clash between the Malay men and the Hindu devotees at the Sri Maha Mariamman Temple,” he said.

Muhyiddin said the government took a serious view of the incident which had caused anxiety among the multiracial and multi-religious people in the country.

The second incident resulted in injuries to a firefighter and a policeman as well as damage to public and private property, he said.

“I believe the police will be able to complete their investigation soon and prosecute those involved as soon as possible,” he said.

Muhyiddin had been briefed earlier by the Inspector-General of Police Tan Sri Mohamad Fuzi Harun on the two incidents at the temple.

The home minister urged the parties in the dispute over the temple site to resolve the matter amicably in accordance with the law.

“No side should attempt to manipulate the issue to trigger racial tension,” he said.

Muhyiddin said he has instructed the police to take stern action against anyone who had violated the law in connection with the incidents. It also includes those who had made racial statements of a provocative nature, circulated false news as well as defamatory and seditious information and organised gatherings to stoke racial sentiments, he said.

“Stern action according to the law will be taken to maintain national security and peace,” he said.

Government respects the decision of the court against Najib – PM