KUANTAN: Pahang police have urged the public not to share  pictures of previous flood episodes and unverified information on the current flood situation in the state.

Pahang police chief ​​​​​​Datuk Abd Jalil Hassan said the spread of fake news can cause undue worry and anxiety among the public, especially residents of areas mentioned in the unverified messages.

“If they receive information on burst dams, overflowing rivers or collapsed roads, we ask that they verify them with the police first, and not immediately share it on social media or WhatsApp groups.

“We will then verify the information. In Pahang, there have been reports of a burst dam. There is no such thing, everything is running smoothly and the authorities and field experts are constantly on the watch, especially during the monsoon season,” he told reporters when met at the Pahang police contingent headquarters’ monthly gathering here today.

He also advised flood evacuees not to waste time when packing up, adding that they should only take along important documents and valuables. 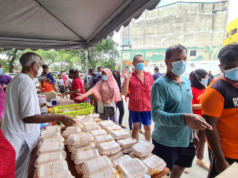