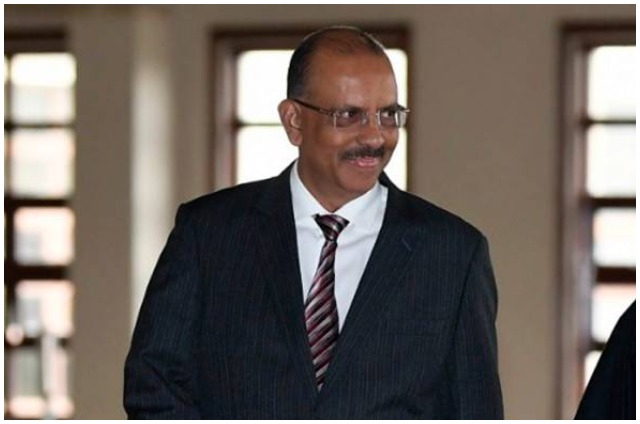 The fourth prosecution witness in the trial of former prime minister Datuk Seri Najib Tun Razak and Arul Kanda who were charged with tampering with the 1MDB final audit report, also denied that anyone from the Prime Minister’s Office or Finance Ministry had threatened Ambrin to amend the audit report during the meeting at Ali’s office on Feb 24, 2016.

Ali, 65, who held his post until August 2018 said this during cross-examination by lawyer Tan Sri Muhammad Shafee Abdullah who is representing Najib at the day-10 of the trial.

The meeting was called after Najib expressed unhappiness over two differing financial statements for the financial year ending March 31, 2014, in the draft of NAD’s audit report on 1MDB.

Ambrin had earlier testified that he was under pressure to do the amendments to the audit report during the meeting.

However, Ali said Ambrin and the NAD officers were not under pressure when attending the meeting that he described as cordial, friendly and based on consensus.

He said among the issues discussed was a request for the NAD to drop two differing financial statements from the draft of the audit report.

Ali also said the NAD had agreed to drop the two differing financial statements given assurance that there would be a police investigation into the matter, however, he added that the latest information he received was that there was no police report lodged and nobody in 1MDB was charged regarding the two documents.

Meanwhile, Ali told the court that he was surprised knowing that NAD officer, Nor Salwani Muhammad had recorded the meeting that intended to discuss changes to be made in the department’s audit report on 1MDB.

Asked by Muhammad Shafee whether the act was unethical, Ali replied that everyone in the meeting room did not know there was a recording, so at that time, it was kind of unethical because there was no permission asked.

Nor Salwani in her previous testimony said that she had the meeting recorded as she was required to take minutes of the meeting for the NAD, but she was not allowed in.

Ali also said that he did not hear any complaint from the NAD that its officers were not allowed to accompany Ambrin in the meeting and was unsure if his officer had made any such instructions.

The prosecution witness said he would have considered having more chairs if there was a request to have the whole NAD team in the meeting but there was no request made.

Asked about his testimony in which he had previously described that Arul Kanda had ‘mendesak’ (pressed) the NAD about certain contents in its audit report, Ali said: “Knowing his (Arul Kanda) characters, he talks softly. He ‘mendesak’ in a good way.”

They were charged under provisions of the Malaysian Anti-Corruption Commission Act 2009, which carry a maximum jail term of 20 years and a fine of no less than five times the amount of gratification or RM10,000, whichever is higher, upon conviction.

In earlier proceedings, Muhammad Shafee confirmed with Justice Mohamed Zaini that a lawyer in his team was tested negative for COVID-19.

Yesterday, the court postponed the trial to today as requested by Muhammad Shafee after he informed the court that an unwell lawyer in the defence team went for a COVID-19 test as a precaution.