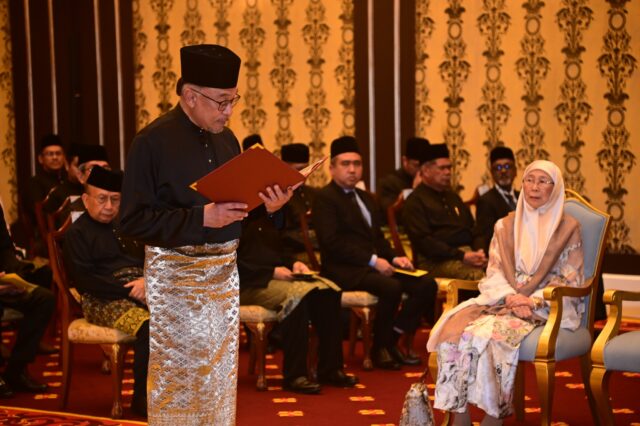 He took the oath in front of the Yang Dipertuan Agong (YDPA) and other dignitaries.

After having been ousted as the deputy prime minister by none other than the former prime minister Mahathir Mohammed, Anwar spent much of its time in establishing and consolidating the reform movement that came to be actualised in PKR or People’s Justice Party.

However, after patiently waiting for more 20 years, despite various kinds of setbacks including twice sent to prison on some vague trumped charges for 10 years, Anwar’s spirit was intact.
Anwar remained unfazed to provide the crucial leadership to steer the country from the rut of corruption, abuse of public funds and series of political misadventures.

It has been long, difficult and tiresome journey for Anwar.
The number one post for Anwar was not an end in itself but to spearhead the much needed reforms that the country badly needed.

Anwar was supposed to succeed Mahathir after PH came to power in 2018. It was an understanding that Mahathir never kept.

The collapse of the 22 months old PH government brought about by a backdoor attempt foiled the chances of Anwar becoming the prime minister after Mahathir.

Anwar was a person that was not acceptable to Mahathir.
Although PH obtained the most number of parliamentary seats, 82 short of a simple majority for the formation of the government, it was nonetheless a coalition with the highest number of seats.

For nearly five days after the election results were announced, the country waited patiently for His Majesty to appoint the prime minister.

The other coalition, PN, under the chairmanship of Muhyiddin Yassin was the strong contender for the number one post having won 73 parliamentary seats.

The early submission of 114 statutory by declarations (SDs) by PN was not enough to convince the YDPA that Muhyiddin had the majority support.

His outright rejection of a unity government proposal by YDPA was regarded as rude and unbecoming of a coalition leader.
Anwar was convinced that he could established the majority, it was just matter of days.

Anwar’s idea of a unity government that was welcomed by most Malaysians. It was a strategic move to obtain the support of Umno, regional coalitions in Sarawak and Sabah.

It was this idea of a broad coalition to ensure political stability and economic development that even influenced His Majesty in calling for a unity model of governance.

At first the concept of unity government was rejected by PN, but as the idea gained has gained currency.

Meanwhile, BN which won 30 parliamentary seats has come around to support the idea of a unity government.

Political coalitions in Sarawak, GPS, and GRS in Sabah despite initial hesitations, have been won over to the idea of a unity government.

His Majesty’s morning meeting on November 24, 2022 with rulers of the states confirmed that Anwar would be the chosen prime minister of the country.

The swearing in ceremony of Anwar as the prime minister was something that hundreds, thousands and millions of Malaysians have waited for a long time.

Malaysians might be finally seeing the light at the end of the tunnel with Anwar as the new prime minister.