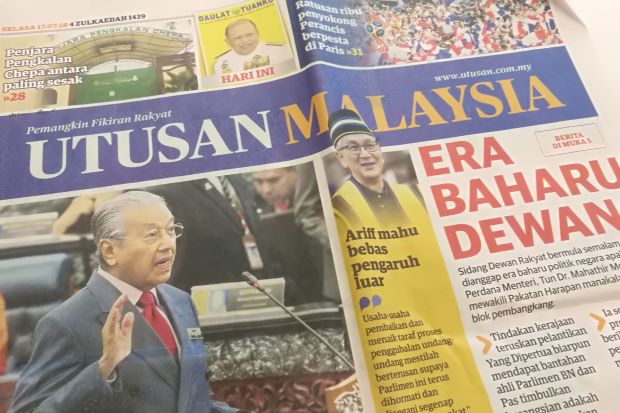 KUALA LUMPUR — News of the alleged closure of Utusan Malaysia and Kosmo newspapers by Utusan Melayu (M) Berhad this Wednesday is just hearsay and not based on an official announcement.

National Union of Journalists (NUJ) Utusan branch chairman Mohd Taufek Abdul Razak said today that based on discussions with Utusan executive chairman Datuk Abd Aziz Sheikh Fadzir, workers were only informed that Utusan would be closed if a settlement on the matter of unpaid staff salaries could not be reached.

“We were informed that if there is no way out, Utusan will close but Abd Aziz did not mention an actual date concerning the matter. We only heard about the Wednesday closure through hearsay from colleagues,” he told Bernama, adding that he did not know the outcome of the Utusan board meeting held this evening.

However, he said, staff had been informed that a briefing would be held with Abd Aziz at 4 pm tomorrow.

About 100 Utusan Melayu workers held a protest today outside its headquarters, demanding to be paid salary arrears of between two and three months.

He said Abd Aziz had also informed them that Utusan “does not have the money to pay the salary arrears and future salaries, and that the company has also been unable to dispose of its assets”.

The Jelebu MP said it was estimated that about 800 workers would be affected by the financial crisis afflicting the company.

“The news about the financial crisis affecting Utusan Malaysia is sad not just for media practitioners but also society in general,” he said.